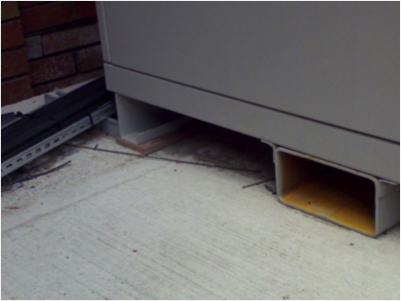 The layer isolator along the edge of the unit (under the folded channel) is 12mm thick. The folded channel is the same height as the rolled steel box section under the middle of the unit. This means that the base frame of the unit is deflecting by about 12mm (as the slab is fairly level) between these two sections (because the base frame is a folded steel section, not a structural support). With a more suitable framework, there would be a gap between the rolled steel section and ground. 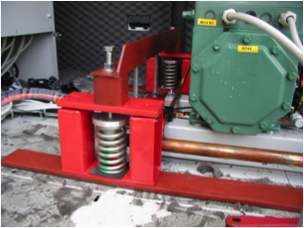 The base does not incorporate suitable supports for the compressors, so the compressors were ‘supported’ on a floor that deflected excessively and resulted in pipework fracturing due to excessive vibration. Although not a pretty installation, our troubleshooting was the most cost-effective way to resolve the problem. The VertiMounts were installed on load spreaders to reduce the deflection in the supporting structure, with the compressors being supported from rolled steel angle brackets between the VertiMounts. This technique avoided the need to reposition or even disconnect the compressors.

The Trees / Hedge will Stop the Noise

Sorry, that's not the right answer.

You really know your stuff!

Find Out Why Here

Put a Hole in the Wall to Let the Noise Out

Not quite, but good try.

You've got it! Well done.

You're right. Way to go!

An Acoustic Barrier Forces Sound to Bend Around it

You got it. Great thinking.

No, that's not right. Try again.

This website uses cookies to improve your experience while you navigate through the website. Out of these, the cookies that are categorized as necessary are stored on your browser as they are essential for the working of basic functionalities of the website. We also use third-party cookies that help us analyze and understand how you use this website. These cookies will be stored in your browser only with your consent. You also have the option to opt-out of these cookies. But opting out of some of these cookies may affect your browsing experience.
Necessary Always Enabled
Necessary cookies are absolutely essential for the website to function properly. This category only includes cookies that ensures basic functionalities and security features of the website. These cookies do not store any personal information.
Non-necessary
Any cookies that may not be particularly necessary for the website to function and is used specifically to collect user personal data via analytics, ads, other embedded contents are termed as non-necessary cookies. It is mandatory to procure user consent prior to running these cookies on your website.
SAVE & ACCEPT